It’s no secret to those who know me that I think mono-black is the most fun way to play EDH. While it has similar pitfalls and lines of play to any other colour combination in the format, I think it has some of the most diverse commander options. Whether it be control, combo, reanimator, Voltron or in this case, whatever your opponents are playing. This time, let’s take a look at Gonti, Lord of Luxury.

Stat-wise, Gonti, Lord of Luxury isn’t the most impressive. At a 2/3 for 2BB, it’s unlikely he’ll be the one to bring the pain. Deathtouch gives him some nice blocking potential, but we’re mostly interested in his enter the battlefield ability. Every time he hits the board, we can pick the juiciest target opponent and look through the top 4 cards of their deck. Once we’ve chosen one and put the rest on the bottom, we have a secretive “second hand” of cards that we can cast and spend mana as though it were mana of any colour on.

Let’s think of some of the possibilities here. Steal ramp spells, counterspells, artifact or enchantment hate or even extract key combo pieces. Sure, we’re hoping for a bit of luck here but if you’re looking for a competitive commander… well, go look at one of Cascade.Cascade’s things, we’re going to win the eternal Jank-Master bragging rights or die trying.

Alright, so what’s the plan? Obviously, we want to steal things, lots of things, and make for some really memorable games. How are we going to go about that? We’ll need ramp, consistency and ways to slingshot Gonti on and off the battlefield at high speed.

Liliana of the Dark Realms
Ugin, the Ineffable

First off are the lands, running as many of the absurd mana generators as possible like Cabal Coffers, Cabal Stronghold, Ancient Tomb, Nykthos, Shrine to Nyx and a Deserted Temple to untap them. Liliana of the Dark Realms grabs swamps to put into play. Crucible of worlds along with Fabled Passage, Prismatic Vista and Myriad Landscape provide consistent land drops and make our scary lands like Cabal Coffers more resilient to targeted land destruction.

Then we’ve got 7 mana rocks including some spicy new options like Victory Chimes, Manascape Refractor and Chromatic Orrery. Ashnod’s Altar and Phyrexian Altar with a bunch of disposable creatures like Bloodghast or Ophiomancer tokens. The ramp rounds out with Solemn Simulacrum, Crypt Ghast and Nirkana Revenant to pump up our mana production.

In terms of “grab anything” tutors, this deck is packing 7 of them. Some cards are vital to our strategy so we’ll want to be digging for them to get max value out of our commander. There’s also Expedition Map to grab lands and Entomb or Buried Alive to put pieces into the graveyard. As for strict card draw, Sign in Blood, Night’s Whisper, Skullclamp, Ayara first of Locthwain, Phyrexian Arena and Necropotence keep our hand full.

Since taking a break from being a crime lord to head up our EDH deck, the line between life and death has been blurred beyond recognition for Gonti. Multiple Sacrifice outlets like Phyrexian Tower, Viscera Seer and the altars chuck him into the graveyard to be pulled back out just as fast with Animate Dead or Shallow Grave effects. Then we’ll double up on his effect with Panharmonicon and Conjurer’s Closet.

Since we’re putting Gonti through his own personal life and death nightmare to suit our ends, how about playing some cards to take advantage of his plight? Butcher of Malakir, Grave Pact and Dictate of Erebos can help keep the board clear. Then Puppeteer Clique and Sepulchral Primordial can take advantage of the stocked graveyards and grab whatever we need. Panharmonicon and Conjurer’s Closet love “enter the battlefield” effects and work great with those two and friends like Meteor Golem, Rune-Scarred Demon and Grave Titan. Ayara, First of Locthwain will even drain our enemies as creatures fly between zones.

In terms of cool, underplayed cards, this deck has a few. The most common is one you will see in the majority of Gonti decks but it’s usefulness can’t be understated. Misinformation allows you to take cards out of an opponent’s graveyard and put them on top of their deck to be exiled with Gonti. Simple but incredibly versatile. 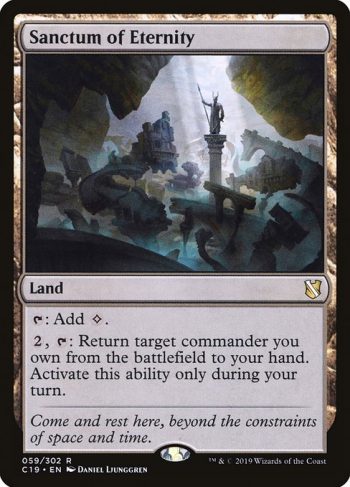 Sanctum of Eternity is excellent with any commander relying on an enter the battlefield ability and is a great include. Copies are still relatively cheap too, so pick one up while you still can! 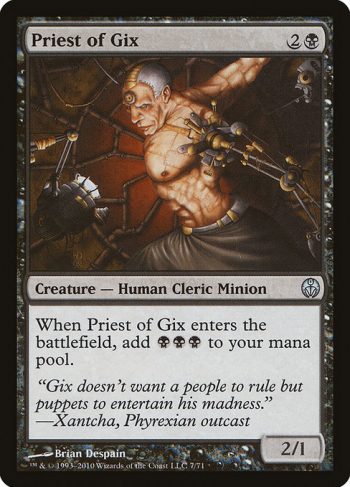 Priest of gix works great with Panharmonicon and Victimize, providing extra mana to extend your plays. Conjurer’s closet can flicker him at the end of turn to add 3 and cast instant spells that you’ve stolen with Gonti, and he opens up more combo opportunities with some different deck choices. 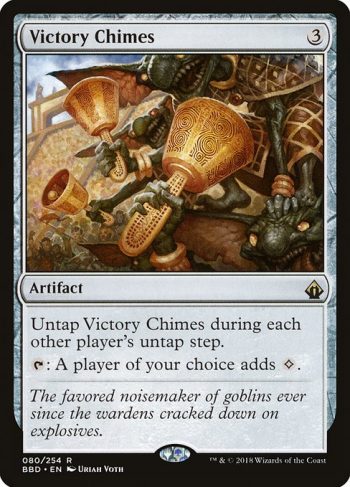 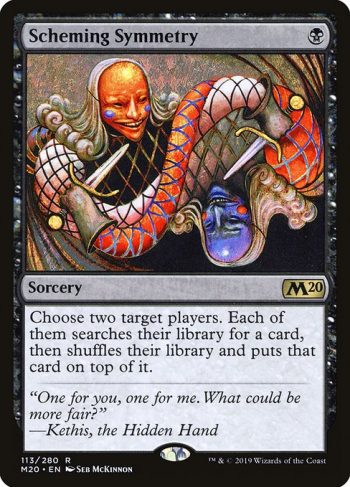 Scheming Symmetry allows for some political plays, but can also be completely negated by Gonti’s effect either stealing the card your opponent finds, or sending it back to the bottom of your deck. Congrats, you’ve just made your own budget Imperial Seal. 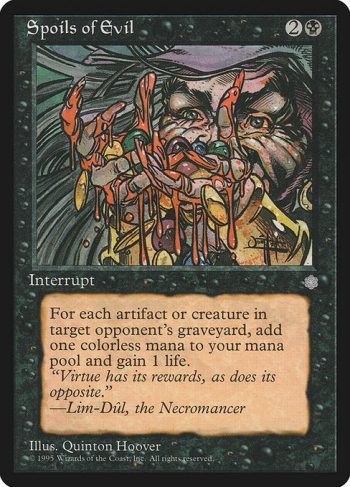 Spoils of Evil is one of my favourite ritual effects in all of magic. For 3 mana we have an instant that, per the gatherer ruling “The text “for each artifact or creature” means the sum of cards which are either creature and/or artifact. Artifact creatures are not double counted.” We should be stocking up our opponent’s graveyards with grave pact effects so this should usually net us a decent amount of mana. Normally a bunch of colourless mana wouldn’t be the best, but Gonti allows us to ignore colour restrictions for stolen cards. The life gain is a nice bonus! 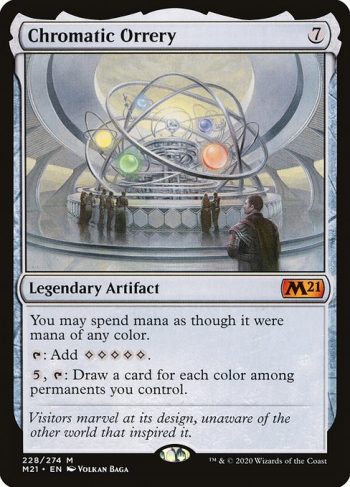 Chromatic Orrery is a very, very good magic card. It makes ludicrous amounts of mana, it can draw a card in a pinch and, relevant to some combos in this deck, it allows colourless mana to be spent as any other colour. Very nifty as a bit of redundancy for turning infinite colourless mana into black.

For answers we run mostly the standard suite of what the average mono black deck has access to. Deadly Rollick/Tragic slip are blacks equivalent of Swords to Plowshares and Path to Exile.

Damnation and Toxic Deluge take out all the creatures at once while edicts effects like Grave Pact thin out enemy lines.

Meteor Golem answers everything but lands and Ugin, the Ineffable hits most problems. For everything else, we’re looking at grabbing answers from our opponents with Gonti.

The infinite combo lines are similar, but require more cards than your typical options. Almost all versions here end up at the same 2 results. Either infinite life-drain via Ayara, First of Lochthwain or we can cast Gonti, Lord of Luxury infinitely and exile every card in every opponent’s deck. Since Ayara is more accidental than intentional, I’ll focus on some of the Gonti lines.

Nets Infinite Colourless which can be converted into infinite black mana

Nets infinite black mana with Phyrexian Altar, otherwise infinite colourless mana which can be converted into black with Chromatic Orrery

I built Gonti, Lord of Luxury out of spare black cards I had lying around while I was swapping cards out my main deck for foil variants. While I haven’t played it in a long time due to having mostly traded them away, I do have many fond memories of playing it. This deck here is a project I took on to imagine what it might look like in 2020 had I kept it around. I hope it can serve as a starting point for anyone who is looking to try out the commander, it really is a lot of fun to play.

As one final point, I’d like to mention that this is a great commander to experiment with if you’re trying to build a deck at a lower power level for your playgroup. If you ignore the combo line or remove it entirely, it really is only as strong as whatever your opponents have brought to the table.

Do you have any suggestions? Have you built this commander and tried it out? Be sure to let us know what you think in the comments! Happy deck building!