Our second return trip to Zendikar is here and with it comes the launch of a brand set of commander decks. I have many good things to say about these commander decks and personally think they’re the best to ever see print. Now, for anyone who wants to play commander like a reasonable person, I would highly recommend keeping your eyes peeled for an upcoming article regarding upgrade paths for Anowon, the Ruin Thief. If you’d rather go completely overboard and turn a $25 pile of jank into a way-too-expensive pile of jank, keep on reading as we take a look at Obuun, Mul Daya Ancestor.

For 1RGW, we’re getting ourselves a 3/3 with 2 abilities. The landfall ability powers up a creature of our choice with a +1/+1 counter every time a land enters the battlefield under our control. This ties in nicely with his other ability to, at the beginning of combat on our turn, turn one of our lands into an X/X elemental with trample and haste, where X is Obuun’s power. On your first reading, this may seem kind of bad, but let’s think about this slightly differently. Obuun is effectively a Voltron commander than can split their damage dealing power in two and attack multiple opponents at once or throw both creatures at a single opponent for a large chunk of damage. Once you frame things like this, some of the potential for a deck to build starts to open up.

Now, like most things green these days, Obuun is already being considered by many to be a strict upgrade to a similar commander who is near and dear to my heart: Noyan Dar, Roil Shaper. While I’ll never give up on Noyan, I can see the advantages that Obuun brings to the table here. First, 3 colour commander decks are generally going to be stronger than 2 colour decks. Most importantly, the addition of green gives a very valuable toolset to any land-focused deck: Land ramp & tutors. Second, our land creature is less vulnerable to creature removal, only being animated from our combat step to the end step. Lastly, red provides access to some additional pump effects and extra combat steps. Rather than just thinking about what we can do with all these colours, let’s have a look at the plan and some of the cards that will get us there.

OK, we’re going to try to pump up Obuun, Mul Daya Ancestor and throw him and the elemental-land he brings along at our opponents life totals. As a back-up plan, we have both a go-tall and go-wide option. The pump effects for Obuun work just about as well with other creatures and cards like Omnath, Locus of Rage or Field of the Dead can put a ton of tokens on board to attack with. Casting Finale of Devastation with X= A LOT usually ends the game too.

Obuun will power up our land creature based on his own power stat, so anything that really buffs him up before or at the beginning of combat will lead to a ton of additional damage potential. Kessig Wolf Run allows us to sink mana into a temporary pump, Xenagos, God of Revels will grant him haste and double up his current power. Neyith of the Dire Hunt will double his power, force a block and usually result in a card draw to boot. Bear Umbra gives a small buff alongside some protection that untaps our lands while Rancor is a recurrent +2/+0 buff that comes with trample. If you need more damage than is reasonable, try combining them with Blackblade Reforged!

Lands in general synergize nicely with the commander format as a whole because you can play as many of them as you want per turn and you can’t be punished by mass land destruction because of an unspoken agreement that Field of the Dead is a fair and balanced magic card or something.

Jokes aside, any strategy involving lands is always going to have some powerful synergies because you a rewarded for putting additional mana sources onto the battlefield thanks to mechanics such as landfall. Then you can take all that mana and dump it into big spells or activated abilities. The main mana sinks I opted for in this build are Radha, Heart of Keld, Crawling Barrens and Kessig Wolf Run.

Then there’s Moraug, Fury of Akoum. I’m going to go on record here, I don’t know what they were thinking when they saw this in the design doc and thought “Oh yeah, print this bad boy”, but the genie is out of the bottle now. Playing a land is now a Relentless Assault stapled to a 6/6 body that pumps your creatures every time they attack. Obuun synergises well with extra combat steps as we can turn additional spare lands into creatures to attack with, so I chucked in an Aggravated Assault for good measure.

Finally we have Obuun’s synergy with land creatures. The exact rules are a little bit funny when we get into the territory of animating land creatures, so consult your local judge before use. To vastly oversimplify here, Obuun’s ability will reset their power and toughness if they were already a creature, but they will retain keyword abilities while gaining trample and haste. In this case, we have 2 lands we care about, Needle Spires & Inkmoth Nexus. Animating these in advance will give us a giant double striking land or flying infector. With trample and haste of course! 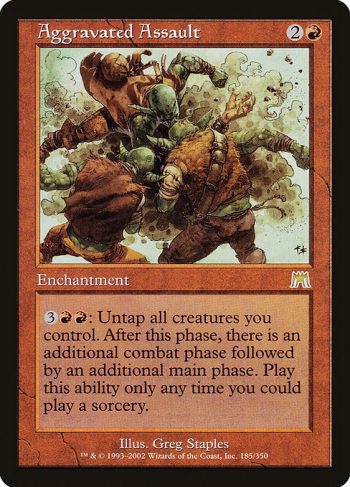 In theory, it’s possible to get infinite combat steps using Aggravated Assault with any combination of ridiculously large amounts of mana and extra combats provided by Moraug. Obuun can trigger each combat step to create another land creature to attack with, and eventually you should be able to make enough to tap them in your post-combat main phases to go infinite. More realistically, we’re going to be using this in conjunction with Bear Umbra. 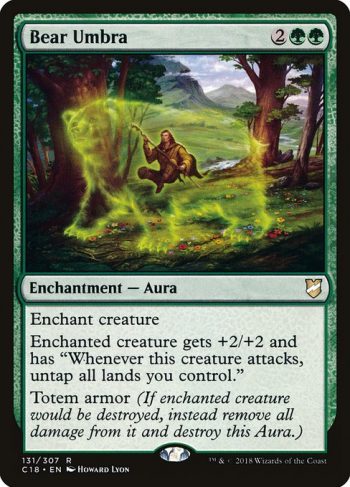 Here’s the really easy way to go infinite. Animate a land before combat, like Inkmoth Nexus for example. Slap this aura on top and then target the land with Obuun at the beginning of combat. Every hit that gets through will untap all of your lands, including the animated land. Add Aggravated Assault into the mix and bury all of your enemies in Obuun’s wrath!

Land decks are very flexible, so you can include a ton of local-meta and preference related tech. In the brewing phase, I was initially considering using a combination of Mirror Entity and Griffin Canyon to make an infinitely large land creature to attack with. The main benefit to this combo is that it’s really, really funny. I decided against it as it needed a few too many moving parts to work to my liking. If you do choose to go down that route, consider adding Phylath, World Sculptor. With everything gaining all creature types you can really leverage his landfall ability with Obuun to get a total of 5 +1/+1 counters per land.

Since Obuun mostly focuses on the combat step, Marisi, Breaker of the Coil or Basandra, Battle Seraph are some solid choices if you need to keep your opponents interactive spells off of your land creatures. Or if you want to go really big, try slamming a Colossification or Eldrazi Conscription onto Obuun and really go to town.

If you feel you want some more protection beyond what I’ve included, you can never go wrong with Lightning Greaves or Swiftfoot Boots. Shield of the Oversoul also works, buffing and granting indestructible. Lastly if you’re struggling to close out games you can always include more finishers and tutors as Naya has plenty. Craterhoof Behemoth and friends are always there in a pinch if need be.

Obuun, Mul Daya Ancestor really surprised me with just how enjoyable he was to brew and build. The deck is pretty enjoyable to play as well and really fits right within the sweet spot of what I think a commander should be. This is an interesting design that won’t warp the format or lead to miserable games and it brings access to Naya lands to anyone who isn’t able to get a copy of Hazezon Tamar or doesn’t want to go all in on the tokens theme.

The precon itself is packed with value considering the $20-25 price-point with multiple wanted reprints like Omnath, Locus of Rage and Admonition Angel. Wizards hit it out the park with these pre-constructed decks and I hope to see more follow this trend in the future. What do you think about Obuun or these new preconstructed decks? Are there any cards you think we missed? Be sure to let us know in the comments section! Also, if you’re looking to build any of these new commanders, or just need a few new cards, consider using our TCGPlayer affiliate link! It’s a great way to support us here at the Command Beacon and we really appreciate it. Happy deck building!

@thekfsee coming from Instagram! Realizing I really should put bear umbra in my obuun deck.