Tanthos here with a deck tech for Oona, Queen of the Fae. This deck spawned way back when Battle for Zendikar was happening and this little puppy was spoiled: Oblivion Sower. I had immediately noticed the wording on Oblivion Sower that it cares about all cards in exile, it doesn’t care how they got there. That means that any cards we exile using things like Oona, Sower brings it onto our side of the board for us to have massive mana at our disposal. Oona was perfect as a commander choice as she is an exile engine, combo outlet, a mana dump, and as one of my favorite tribes, the Faeries.

Oona, Queen of the Fae

Nice library you got there, Shame if something happened to it!

Nice Exile pile you got there, You’re not doing anything with it, right? Let me just take care of it for you

My earlier builds of Oona before had been tribal faeries and that was a lot of fun, however, it was punching above its weight class as my meta was rife with combo centric decks and board wipes. Playing the reactive game and having counter magic open, isn’t my style. I really wanted to formulate something meta to combat this, thus Tribal Exile was born.

Being proactive by ripping the combo pieces out of their libraries. Nipping problematic cards before they become a problem like a MTG Minority Report. Removing win-conditions, like Craterhoof Behemoth Laboratory Maniac, or Maze’s End was much more satisfying. Be forewarned that people don’t like it when you rob them of their playthings but at the same time, if they are playing combo that wins out of nowhere, they should expect to be targeted and should really have a “Plan B” once their combo falls apart.

Oona, Queen of the Fae

Curse of the Swine
Damnation
Feed the Swarm

Who wants to play this deck?

This deck is for people who are fed up with the combo races, the cold war tactics that arise, and want to be proactive in setting up their board. It is worth noting that there is very little milling in this deck. Exiling is not the same as milling. Commander has evolved to the point that we treat the graveyard as a second hand. Muldrotha and Karador LOVE a stacked graveyard. Although adding Mill would speed up the clock in decking people, this deck’s purpose is to remove cards from the game and not enable graveyard strategies to run wild.

The pilot of this deck needs to be cognizant of the potential combos that exist in your pod, be able to recognize the pieces of combo, and be able to rally the rest of the table to respond accordingly. Sometimes the RNG gods do not smile upon us and we need to be able to cut our losses as some of our exile is symmetrical (e.g. Crumbling Sanctuary, Pyxis of Pandemonium).

Why play this deck?

You might be thinking, “If you hate combo so much, why are you running combo? Isn’t that hypocritical?”. Not all combos are the same. The type of combos that I typically frown upon are the ones that end the game within the first couple turns. The two card combos that end the game if people don’t have instant speed responses. Most of the combos in this list require at least 3 pieces. You can definitely add tutors to make this deck more consistent, but I’ve purposely left those out to add variance to the game.

This deck is essentially a big mana deck that falls under the Combo/Control archetype. With doublers like the following Crypt Ghast, Caged Sun, and Cabal Coffers, you really want to be casting Oona and dumping all your excess mana into her.

This deck is by no means competitive. I play this deck with no expectation to win, but I can look forward to seeing my opponent’s faces crumple as I methodically remove their win conditions and eventually have them deck themselves or swarm them with 1/1 flying faeries.

How to play this deck?

As mentioned earlier, this deck is essentially a ramp deck. You really want to avoid being seen as a threat as this deck has limited protection against concentrated aggro. You want to hit your land drops and ramp via artifacts for the time being. Tribute mage should be getting you Sword of the Animist or Thaumatic Compass. Cards like Thada Adel can be used to either steal your opponents’ mana rocks, or start removing problematic artifacts from libraries like Winter Orb, Isochron Scepter, or Bolas’s Citadel. Save cracking your fetchlands for as long as you can as you want to double the effect with Rings of Brighthearth. You want to save any Bitterblossom tokens as they are potentially cards down the line with Skullclamp, blockers to protect your planeswalkers, and fodder to feed into Ashnod’s Altar.

This stage requires you to politic accordingly. You want to dissuade people attacking you via mazes, chump blockers, and political favors, as a lot of our answers are one-for-ones. It is important at this stage to keep your eyes peeled for potential combo pieces/engines and flag them to the table as necessary.

There have been plenty of times where I bargained to swing into someone with a Grimoire Thief so that I can point the exile at another player. There are times where I make a deal to never use any modes of Ashiok, Nightmare Weaver aside from uptick. As our deck is good at getting rid of things while in the library we need other people to answer things in play.

This deck packs very limited counter magic, but that doesn’t mean we can’t bluff. Information is a resource as well. We can suggest alternative plays to opponents (to answer problematic permanents & deflect attention), perform fear mongering of “losing to combo” (so they leave you to cap players uninhibited), and strong-arming them for favors (like promising to not target them with Oona when you weren’t going to anyways). These are some of the means in which to leverage our knowledge of the game to further our own agenda.

This is where the deck shines. Players tend to have lots of excess mana, but no gas. With Oona at the helm, she is our mana dump to turn that mana into a library shrink ray and a flying army generator. Knowing whom to point the the exile ability to is very important as you need to balance, targeting the combo players, but also choosing which library you suspect will give you more tokens to spawn your army.

There are multiple mana combos in which to close out the game should you choose. You can also go down the aggro strategy with fliers too if need be. Some minor inclusions like Glen Elendra Liege, Kindred Discovery, or Heraldic Banner, suddenly death by a thousand cuts, become death by alpha strike.

Some neat interactions are to repeatedly use Academy Ruins to recur Expedition Map to fetch you any land you want or any artifact that may have been broken along the way.

Urborg, Tomb of Yawgmoth works really well with Cabal Coffers, Crypt Ghast, Nirkana Revenant, and Caged Sun. The added usefulness of turning our utility lands into ones that also tap for colored mana (i.e. Chromatic Lantern) go along way in ensuring that we can cast our color intensive spells.

I try to maximize the number of basic lands in the deck as to not get hosed by Blood Moon or Back to Basics. We want to to have enough targets for fetch lands/Sword of the Animist triggers, and a high enough swamp density that Crypt Ghast can be used organically should Urborg gets shut down.

Oona and Bitterblossom make faeries, which you can sacrifice to Ashnods, which you feed back into Oona, which makes more faeries, and as long as you have colored mana you can repeat ad infinitum. Throw in a Skullclamp into the mix and now your cooking with gas.

Dire Undercurrents is a sweet card as it makes almost all your creatures have an ETB effect. The tokens that Oona makes are both blue and black, thus each faerie you make, means you draw a card and someone else discards a card. Do note that Bitterblossom only make mono black rogues. 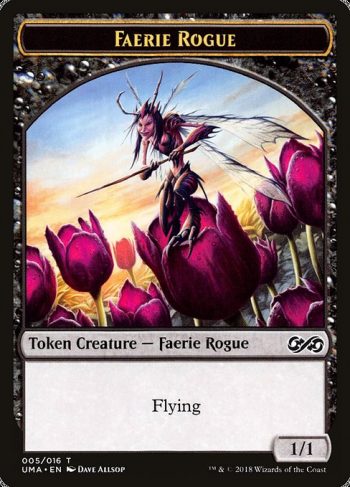 This one is Mono Black and from Bitterblossom 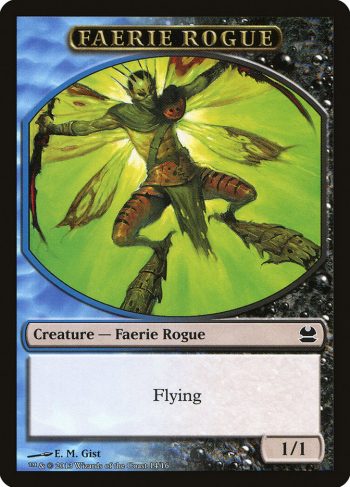 This one is Blue & Black, from Oona.

Rings of Brighthearth can copy fetch land activations, planeswalkers, and Oona’s ability herself. (circa 30 potential copy targets with rings). If you have 11 mana available, do you target one person for 10? or target two different players for 8? or the same person for 8 twice (i.e. 16 cards). It all depends. One choice nets you only 10 cards, copy the ability with rings lets you choose different people, and also change the color selection between resolutions.

Fast Aggro strategies can ruin our game plan, That’s why we have cards like Bitterblossom, Glacial Chasm, Maze of Ith, and Thaumatic Compass to protect ourselves. We have Crucible of Worlds to recur our lands as need be.

Niv mizzet or The Locust God never trigger as drawing is replaced with exile. Do note that this makes counter spells worse for both your opponents and you.

Nim deathmantle + Ashnod’s Altar + Puppeteer Clique = Take all creature cards out of Graveyards, they gain haste, exile them at end of your next end step.

Oona can be a versatile deck that leans into tribal synergies, a combo machine, or even heavy control. Her base stats of a 5/5 flyer is nothing to sneeze at and her ability to create tokens makes for great chump blockers to protect ourselves and later cash in those bodies into mana or cards.

This deck can be polished further with cards that untap lands to abuse Cabal Coffers, or fancy mana rocks, or tutors to add consistency. Card velocity is lacking but can be augmented with card draw. Permanent and Stack interaction is lacking as well, but we make up for it in messing with peoples libraries. There are some generic “Good Stuff” staples in this list which are needed to remain as a cohesive deck but you can definitely double down on more exile cards like Sadistic Sacrament and Jester’s cap.

Whichever way you build her, I am sure you’ll enjoy piloting the flavorful “Mother of All Fae” and marvel at the art styles that were present in Lorywn/Shadowmoor

Tribal exile seems really cool, is a shame that we couldnt have white so could run Kaya that deals damage equal to the number of cards in exile but oh well, sweet deck!

Exile is just so much more salt than mill