With the release of Core Set 2021 came a slew of Commander cards both new and old. WOTC seems to have had Commander players in mind when building this set and it shows quite clearly. If you’re wondering what to pick up here’s a list of cards from the set that you should probably add to your collection. Whether you don’t have them already, need more copies, or just looking to upgrade to the full art, foil, or full art foil versions, let’s run through the list. 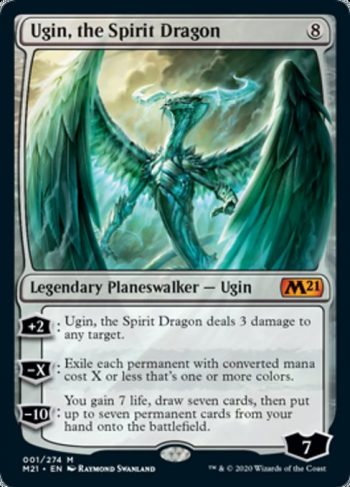 While not a surprising selection we still want to go over why the spirit dragon is so great. Ugin’s built in board wipe can answer most coloured threats. The exile can devastate board states and answer indestructible permanents while preventing death triggers. Ugin, the Spirit Dragon is an incredible card coming out with a high loyalty that can quickly run away with a game with its ultimate as a huge resource boost. 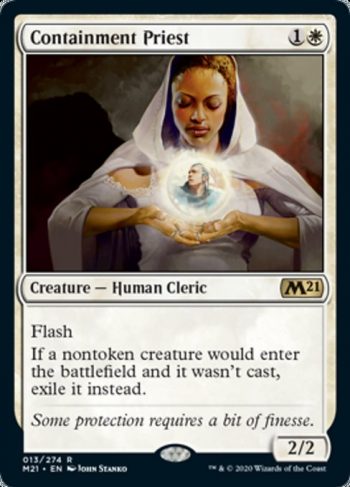 Originally printed in Commander 2014 this is an effective low cost creature. At first glance Containment Priest might not look like much, but it really can do a lot during a game. The low cost and having flash, it can be a solid response to a spell or effect, stopping spells such Green Sun Zenith, Birthing Pod, Animate Dead and recursion abilities such as Persist and Undying. If we paired with cards like Eldrazi Displacer or Parallax Wave you can exile your opponent’s creatures permanently. An inconspicuously powerful card that stops all sorts of strategies. This 2/2 has the potential to shut down entire decks. 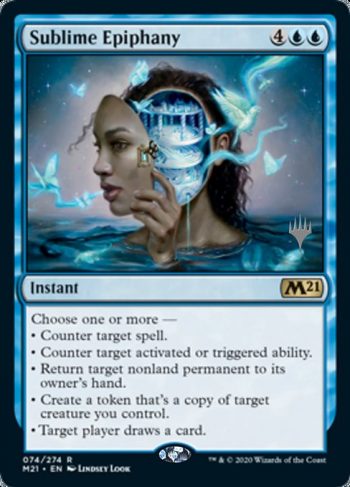 Sublime Epiphany reminds me a lot of Mystic Confluence. At 6 cmc this spell might scare some people away but thinking about what this spell can potentially do during a game it’s definitely worth a chance. Notably this modal spell can counter triggered abilities, meaning if an opponent is casting a spell with a cast trigger like Emrakul, the Promised End and other Eldrazi we can counter both the spell and trigger. This of course on top of the other three modes that could be used is a ton of value. 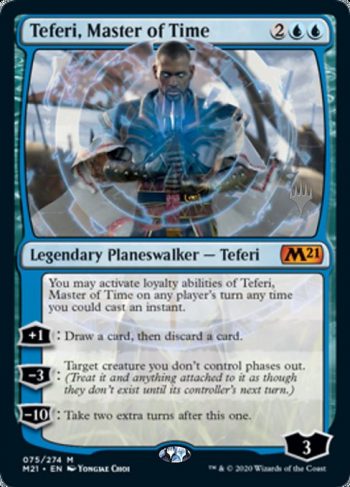 This may be just another powerful Teferi planeswalker and yet they have made this one is pretty unique. The ability to activate at instant speed enables you to use his effects as a response. A commander game with 3 opponents you get 4 activations every turn cycle. Paired with Oath of Teferi for 8 activations a turn cycle and you will be getting to that Time Stretch ultimate in no time. 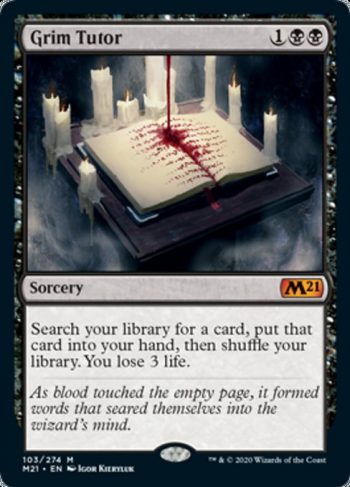 Before Core Set 2021 this was an incredibly expensive card, mostly due to the scarcity of availability due to it’s printing. While not as good as a certain other commander legal tutor (Demonic Tutor), some players want the redundancy and include all possible tutors in their deck for consistency. A nice pick up but with this new printing feel free to wait a bit on the price (unless you want your foil full art version now to bling things out). 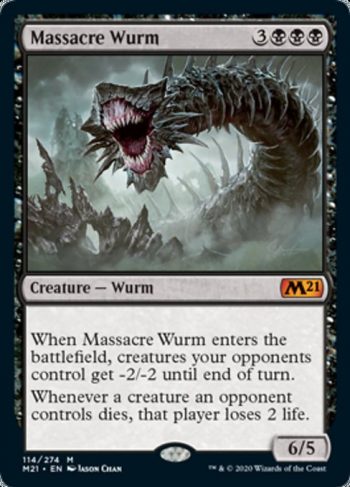 Another amazing card that finally gets a reprint. Massacre Wurm comes out as a solid body that also clears out your opponents small creatures or at least shrinks opponent’s creatures. This can help clear the way of blocker or make a your opponents smaller making way for a good attack the turn he comes out. As an added bonus while Massacre Wurm is on the battlefield, opponents will continue to lose 2 life every time one of their creatures dies. 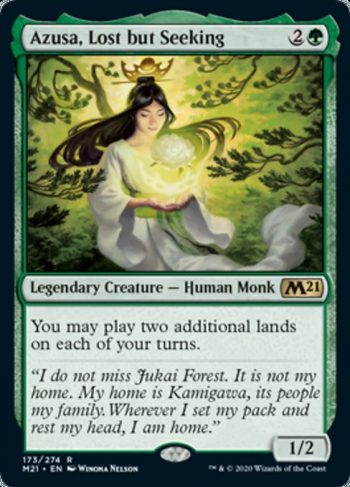 The original powerful green commander, Azusa, Lost but Seeking will quickly get you to your late game. Paired with Crucible of Worlds and Strip Mine, can end a game pretty quickly and saltily. With the number of land strategy cards that have been released since her original printing she has an incredible growing toolbox available. Even as a card within a deck the additional land drops can be used and abused to get you far ahead of your opponents quickly. 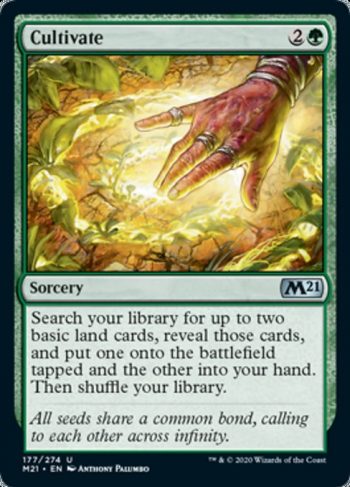 Cultivate is at the top of the list of best ramp cards. Not only does it replace itself with a basic land in play but a basic land goes into your hand which could be played for the turn. It’s a great way to improve the consistency of your deck and fix colours. When playing it I would always recommend playing it’s arcane counterpart Kodama’s Reach as well for redundancy. Simple common ramp spells but absolute best in class though it’s still strange it got a full art version but we’ll take it. 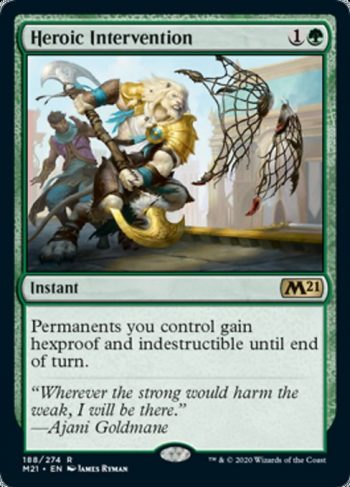 Originally printed in the Kaladesh block in Aether Revolt, this is a great trick spell that protects your permanents by granting them both hexproof and indestructible. Pair Heroic Intervention with things like Armageddon or Oblivion Stone to destroy all your opponents hopes. Another great reprint for the set and a great surprise response for green decks. 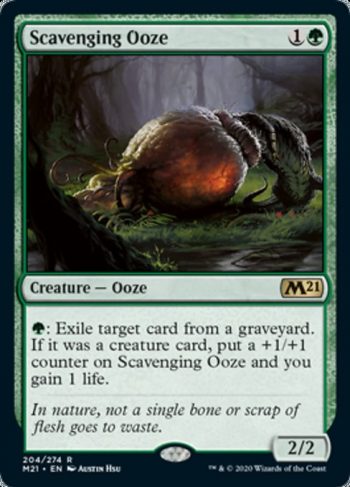 From the original Commander decks Scavenging Ooze is a highly effective and versatile utility creature. It will keep graveyards in check, gain you life and grow with +1/+1 counters. With its instant speed ability you can respond to undying creatures or Snapcaster Mage targeted spells by having your ooze eat the card before their triggers resolves. It was highly priced in the Counterpunch deck but after a series of reprints it’s back in standard and still as powerful as ever. 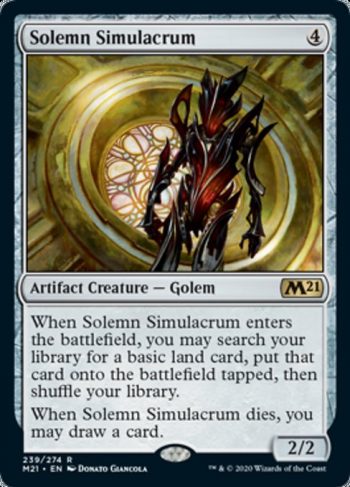 Solemn Simulacrum has always been a staple, providing huge value by ramping, fixing, and blocking in any deck. It’s simple casting cost makes it easy to turn 1 Sol Ring into turn 2 Solemn Simulacrum. When it’s time to say goodbye our Sad Robot friend will draw you a card as a parting gift as well. Truly a friend to Commander players and a great card to pick up if you haven’t already. 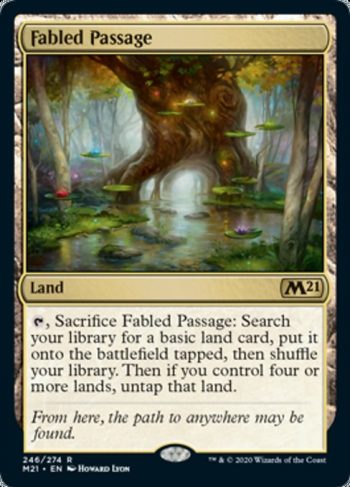 Fabled Passage quickly became a popular choice due to availability and price. It effectively replaces both Evolving Wilds and Terramorphic Expanse by having its come into play tapped downside removed if you have four lands including the one you’ve searched for. This reprint is quite soon after the original printing but nonetheless welcome as during Throne of Eldraine this was a hot pick up as well.

If you feel I’ve left a card out, let me know in the comments. There are so many cards in Core 2021 and this list focused a lot on proven reprints but I’d like to know more about some of the new cards. I’m very interested to hear any stories about your experiences with the set. Prices are pulled at the time of writing. Selecting a name from the above list of cards will direct you to TCG Player for a current pricing of these cards. If you enjoy our content and wish to support us use our affiliate links to make your TCG Player. Thanks for reading!