Ikoria: Lair of Behemoths is a wonderland for Commander players filled with incredible creatures and new toys to play with. Now what fun things from the set would make the good additions to our lovely collections. Let’s take a look at our top picks for the Commander format from Ikoria. 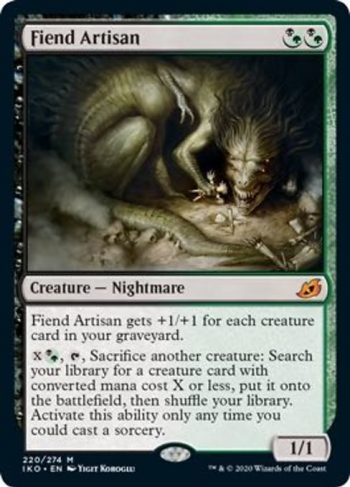 This mythic 2 cost Golgari Hybrid creature is incredibly impressive in all aspects. With it’s stat boost ability you can have a high powered low cost creature late game. Its Birthing Pod like ability is the main feature though but what you can search for is determined by how much mana you can sink in not by converted mana cost. A high powered and versatile card that will fit in mana decks this is one for the collection. 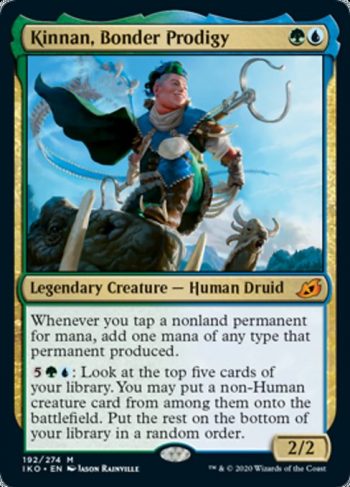 Our Simic human legendary creature of the set instantly combos with Basalt Monolith. While increasing the mana generation of your nonland permanents there is the built in mana sink ability for 5UG. A powerful way to cheat in non-human creatures from the top 5 cards of your library with a solid static ability or a low cost there will be some high appeal to both competitive and casual players alike. 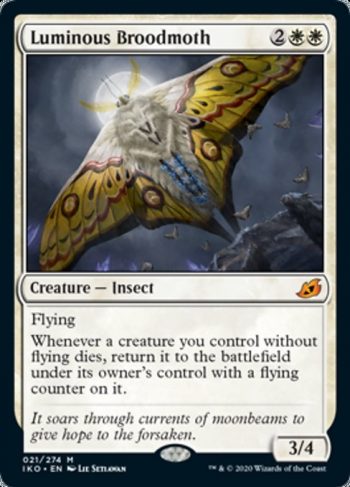 This insect has an incredible amount of potential. It’s ability is similar to Persist and Undying, returning any creature you control that dies and doesn’t have X to the field. Instead of -1/-1 counters or +1/+1 counters Luminous Broodmoth triggers for anything you control that doesn’t have flying and brings it back with a flying counter. Like a white version of Mikaeus, the Unhallowed but granting evasion instead of power the combos and value are huge. This is a great addition to many decks and a great deck building piece to grab. 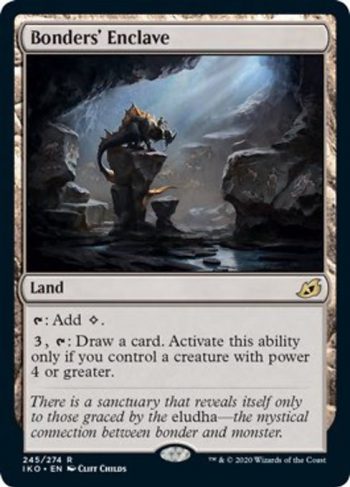 A good choice for creature heavy decks that may be running Arch of Orazca as the draw requirements are easier. It’s requirement is having a creature with power 4, a mechanic that was named Ferocious in the Tarkir block. It also only takes 3 mana and tapping Bonder’s Enclave, significantly less than Arch of Orazca at 5 mana. Decks like mono-green or high powered aggro would make great use of this land. 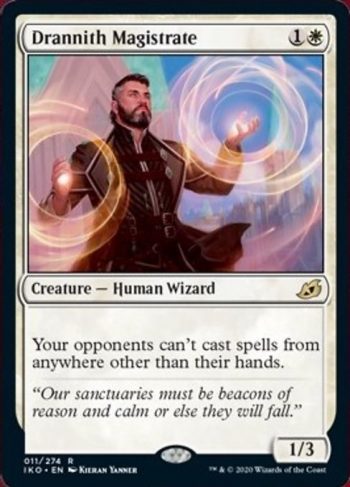 A new low cost powerful disruption effect to the “Hate Bears” category. Drannith Magistrate prevents your opponents from casting things except from their hand. This shuts down effects like flashback, suspend, and rebound while also stopping any cards that can cast from the top of your deck, the graveyard, or exile. Notably it can shut down the ability to cast a Commander or companion which makes it a dangerous card against the strategies for all sorts of opposing strategies. While it is just a 1/3 for 2 in the right situation it’s devastating and in the right combos it’s game ending.

The Triome lands are not a surprising selection. The best comparison is the rare allied cycling land cycle from Amonkhet, which for any deck that could run them gave a good fetchland target. In comparison to the dual lands and shocklands which have the ability to come into play untapped albeit at a cost the cycling lands do not so taking them earlier with fetchland and leaving the lands that could be played untapped later was a strong play. They had their strengths and cycling them when you had an abundance of land is useful but the Triome lands are incredible for colour fixing. Whether with a fetchland or Farseek these are great lands to search for and does everything you need them to.

While I am grouping the Ultimatums together they are worth picking up and running where you can. They are much stronger than their Alara counterparts and are significantly more breakable. Whether you’re reanimating your whole graveyard, tutoring for win cons and dropping in permanents, or destroying all your opponents non-land permanents these are incredible and potent. Inspired Ultimatum is the questionable one but it is card draw at least. 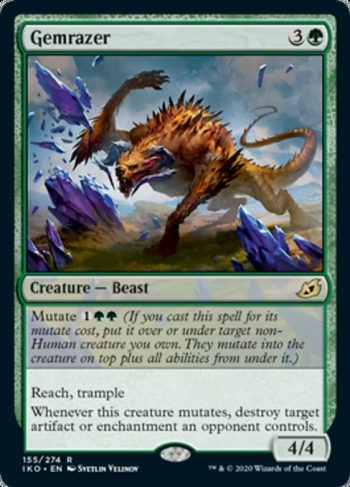 One of the stronger mutate creature options. A 4/4 for 4 mana with reach and trample at the very least and a Reclamation Sage effect if you can mutate it. Aggressive, defensive, and useful, I would expect to face this down in a variety of green decks. 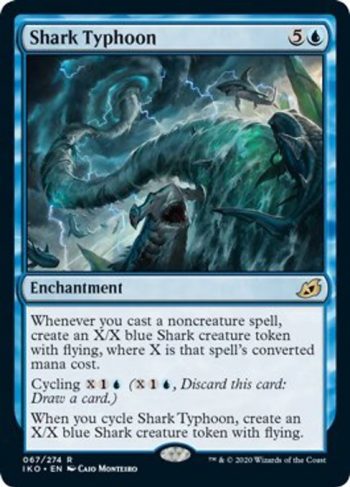 Sharknado the Magic card is actually pretty good though a bit pricey to cast. If you’re not looking to cast it you can at least cycle it and create a nice big Shark token. 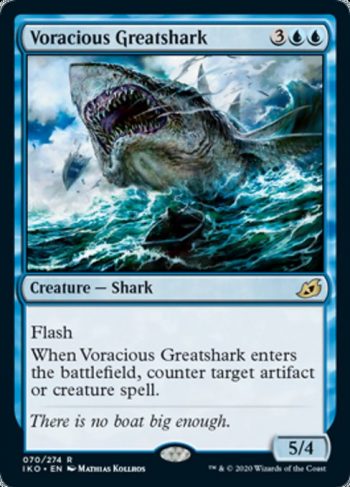 Jaws the Magic card here is great in all its abilities. Flash shark is a sudden 5/4 that can counter a creature or artifact spell giving you many great two for one opportunities. 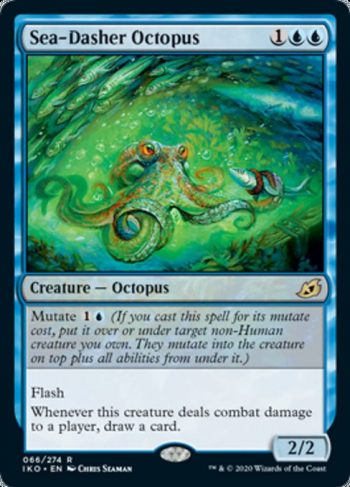 The smallest flashy mutate creature is a bit like Ninja or the Deep Hours except it becomes part of the creature. The draw power being its biggest allure but as one of the cheapest mutate costs it can help trigger other mutate abilities at instant speed. 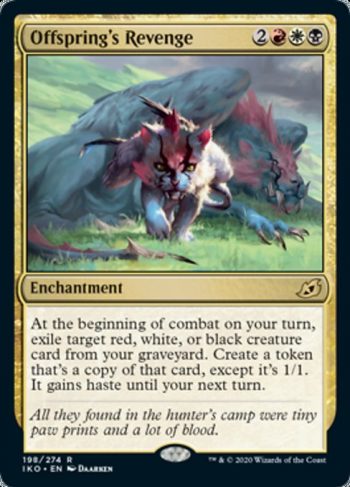 In comparison to Nightmare Shepherd which came out right before Ikoria this enchantment is a bit more difficult to cast but doesn’t need to see the creature die. While it can only be used once per beginning of combat on your turn it does grant haste to the token until the end of turn. It makes a good case for sending your Commander to the graveyard for an additional use whatever that may be whether an enter the battlefield effect or otherwise. 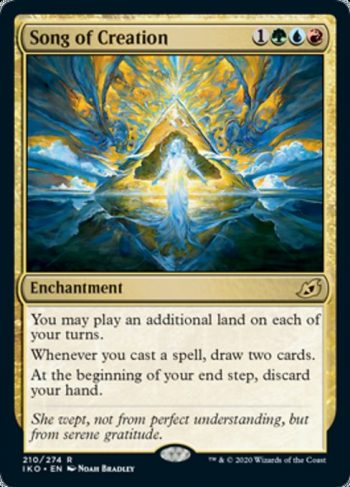 A dangerous but highly effective card with an Exploration effect built in. You’ll draw two cards every time you cast a spell but you’ll have to discard your hand at the end of your turn. If you’re top decking anyways it’s a great way to dig for resources but its potency comes with a price. A nice enchantment to try out in the right deck. 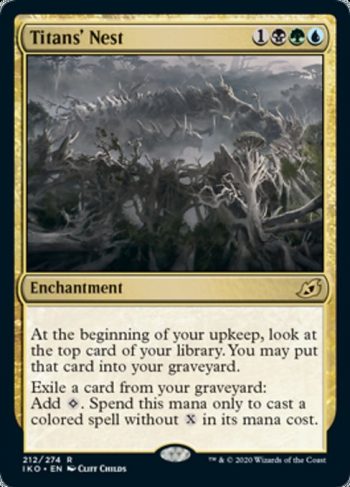 Giving yourself a surveil every turn may not seem like much but turning your graveyard into a source of mana is incredible. This can easily turn ugly with enough cards in your graveyard to make up for your lack of mana just pay the colours and you can cast all sorts of spells likeOmniscience, Rise of the Dark Realms, or Tooth and Nail. It’s limit on coloured spells and spells without X in the cost is fair but not enough to stop this from being broken. 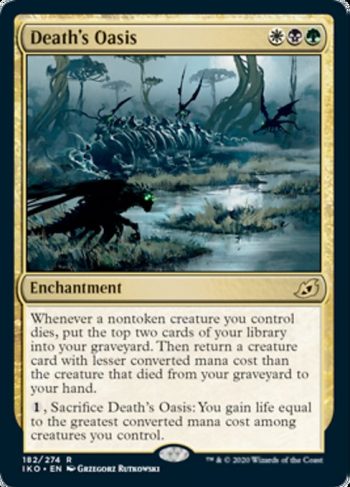 Recursion, self mill, and a bit of lifegain if need be. The lowest cost of the rare enchantment cycle is the most synergistic with its colours. As a passive way to recover creatures from your graveyard and digging through your deck for more things to bring back it’s a great piece in any Abzan graveyard strategy deck. 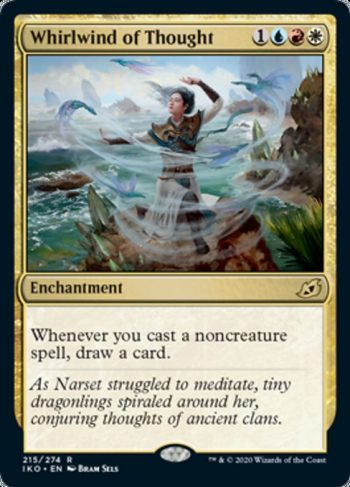 While much simpler than Song of Creation it comes with much less risk. A steady draw engine that draws you for casting non creature spells is easy to use and abuse with something like Sensei’s Divining Top or even just Counterspells. 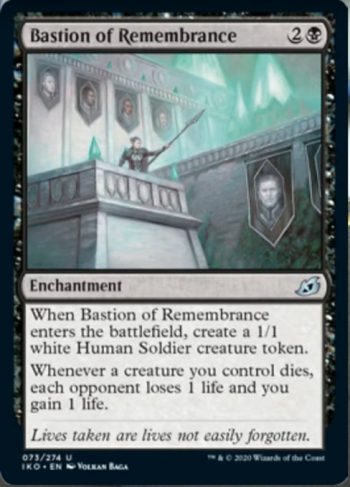 An uncommon enchantment that brings a token with it. Blood Artist effects are not too rare anymore with this being the one sided type like Zulaport Cutthroat. Enchantments are generally more difficult to remove than creatures and another solid low cost redundancy for life drain decks are always welcome. 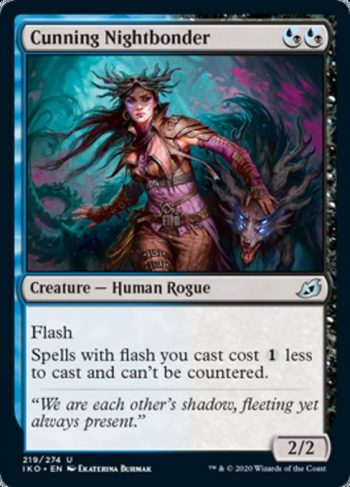 The Dimir hybrid uncommon with flash tribal abilities. Flash on its own is always a powerful ability for a card and while this may just be a 2/2 for 2 it applies a discount and uncounterability to your other flash spells. This card curves very well with decks like Wydwen the Biting Gale or in conjunction with Teferi, Mage of Zhalfir. 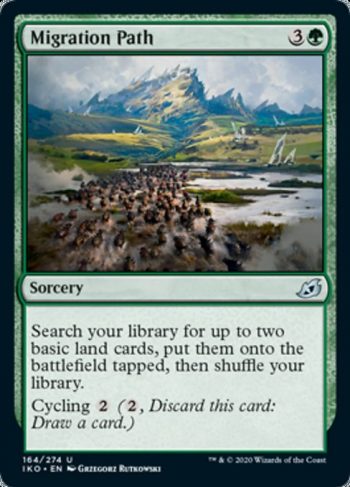 A simple upgrade option to Explosive Vegetation as it functions identically as a ramp spell but with an additional cycle ability when you don’t need it. 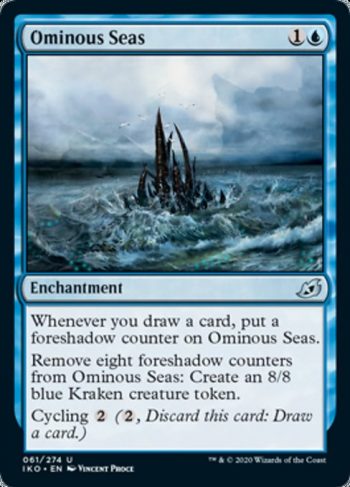 Even without the combo it has with Greater Good this is a great enchantment for decks with high draw power. As it does not sacrifice itself to create the 8/8 Kraken you can repeatedly make huge threats at instant speed. At worse you can cycle it but with Wheel of Fortune and Windfall effects this two drop enchantment can be a great win condition.

These new 3 cost mana rocks are a great fit for their corresponding 3 colour decks. Out of the staple mana rocks they would Commander’s Sphere. Late game or when you have enough mana and would prefer something else cycle it away and keep digging through your deck.

The amount of new toys we get to play with goes on and on. There are staple lands and mana rocks and all sorts of fun creatures to break. Whether used with other Ikoria cards or not I feel the list is filled with strong options and even possible staples.

As for Commanders we’ve got a nice handful of options between the three colour legends, the humans, and the companions. We still have more though so let’s take a look next time at the Commander 2020.